Kelly Dodd reportedly knows she’ll be fired from The Real Housewives of Orange County and is bracing herself for the news as co-star Elizabeth Vargas offers the controversial star support.

When you compare Kelly’s behavior on season 15 of RHOC to previous seasons — except for the reunion — she was actually quite tame and not too controversial. However, her antics on social media and divisive behavior off-camera will likely force Bravo to snatch her orange away.

Amid the neverending controversy surrounding the reality star, a source says that Kelly is “expecting to be fired from the show,” though it hasn’t been confirmed just yet.

“Although she would love to stay on the show, she has come to terms with it,” the source told E! News. “She knows it’s coming.”

Kelly is apparently “standing by her opinions” according to the insider, and she feels like she’s being pushed out as a result. She believes the network favors Braunwyn Windham-Burke, who Kelly recently called “dangerous” before claiming she can no longer film with the mother-of-seven.

Kelly has had a tough couple of weeks, to say the least. She was forced to defend herself against her own step-daughter, Veronica Leventhal, after Veronica seemingly shaded her stepmom for claiming she’s “Black” at the reunion. Then, the star was slammed for mocking the pandemic, once again, after she went Live on Instagram and seemingly joked with friends about being “super spreaders.”

As a result of these latest actions, the Arizona native was fired by Positive Beverage due to her “controversial views and opinions” as they released a public statement condemning the star’s behavior.

“Our core values of wellness, community, diversity, and inclusion should be reflected by our brand and anyone associated with it,” wrote Positive Beverage’s Head of Brand, Zach Muchnick. “It has become clear over the past few months that Kelly’s controversial views and opinions have distracted from our primary objectives, so effective today, we are no longer affiliated with Kelly Dodd-Leventhal.”

Soon after Kelly responded to the firing and said she was happy she was able to “help put Positive Beverage on the map,” the 44-year-old announced her newest business adventure on Instagram, but she deleted the post a short time later after receiving backlash.

“So excited to announce my newest venture!” Kelly wrote on February 1. “I’m collaborating with [UVé Beauty] to bring the highest level of hygiene and sanitization to the beauty industry. You won’t believe how amazing these products are. Let me know how you like the blenders and brushes. Out with the old, in with the UVé.” 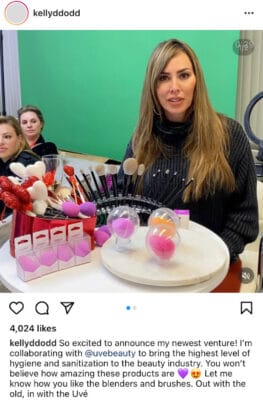 Elizabeth seems to have Kelly’s back, though. The newbie — who recently launched her own line of tequila —  took to Instagram to support her friend while shading Positive Beverage by writing, “Some ‘Positive’ news[,] Kelly ‘left’ the drink business [to] sell beauty tools.”

After immediately receiving backlash from fans, the Edge Music CEO edited the post, adding, “I understand where everyone is coming from but please understand we are all just trying to make it in this world… one step/product at a time.”

Although Elizabeth recently claimed she’ll be returning for season 16 of RHOC, for the time being, both Elizabeth and Kelly’s future on the show is still up in the air as Bravo has yet to announce who will be returning next season. Andy Cohen has also hinted at a complete “reboot.” Stay tuned, folks!