All shopping is moving online — including luxury fashion — and that’s why luxury fashion e-retailer Farfetch (NYSE:FTCH) has been one of Wall Street’s favorite stocks over the past year. During that stretch, Farfetch’s stock price has risen more than 500%. 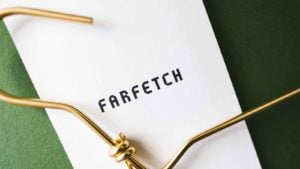 But things aren’t going so well for Farfetch stock today.

The company reported fourth-quarter numbers Thursday, after the bell. Those numbers were good and topped estimates.

But the company’s growth momentum meaningfully slowed from the third quarter, and management is guiding for this slowdown to carry into 2021.

Investors who have been bidding up FTCH stock for over a year now, weren’t too impressed. Farfetch stock dropped more than 10%.

Some consolidation here while investors process this slowdown as well as broader interest rate headwinds. Then a return to the stock’s long-term uptrend.

So, if time is on your side, you

NEW YORK (AP) — Christian Siriano opened his second show of the pandemic Thursday with two ladies in bed, models who emerged flawless in black one-pieces, then dressed for all to see before hitting the runway.

It was a dreamy, color-saturated show during a tough time for fashion inspiration, Siriano said. He created an alternate reality inspired by a recent jaunt to Aspen, Colorado, to visit family for the first time in a year.

While most designers have gone fully digital during an expanded New York Fashion Week that has stretched the traditional calendar, Siriano remains committed to the runway.

“If you take this away, and the glamour, then it’s like I’m just at the office talking about money all day, and that’s not what I want,” he told The Associated Press after the fall-winter show attended by about 75 in-person guests. “I wouldn’t want to do this job if

After some initial resistance and a slow start, designer Stella Jean credits the Italian National Fashion Chamber with “a lot of goodwill” in pushing through an enhanced collaboration with five young designers, including financing and partnerships with Italian suppliers.

“When you want to do something, you can do them immediately,’’ said Jean, one of the founders of the Black Lives Matter in Italian Fashion campaign. “I have been working hard to overcome this gradualism that is part of the mentality of a certain part of the Italian fashion world.”

6 best women’s sweaters in 2021, according to fashion experts

What is the best fabric for sweaters?

Here are the seven best fabrics and blends the fashion pros say you’re most likely to come across while shopping for sweaters.

Sweaters made with natural materials

While you shop, you’ll find these four materials in both organic and recyclable variations.